On the Ecology of the Devil Swine 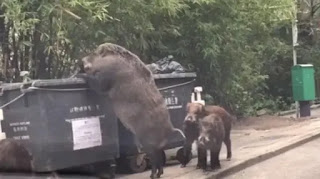 Description: Pigs that walk as men, or perhaps men who are secretly pigs


Rumors and other whispers in the dark:
Variants Devil swine are shapeshifters, but are not 'true' lycanthropies. But there have been tales of them being able to share or extend their shapechanging magic to dogs, snakes, and rats also, allowing them to take the form of men, so long as they serve the devil swine
Combat Tricks Devil swine never engage in prolonged combat, preferring hit and run tactics. They ply their victims with food and worthless treasures
Food spray: The devil swine sprays out all the food that's in it's mouth along with bile, stomach acid, and a bit of wine. Everyone nearby is at -2 on all their rolls until they can take a turn to clean themselves off. Not cleaning yourself off within 2 hours will cause you to contract 2-5 diseases.
Leg Run: Instead of taking any other action, a devil swine in combat can drop to all fours and run through the legs of the target. The target must save versus paralyzation/Dexterity/Reflex or fall prone. The devil swine can move up to 40' behind the target
Valuable Resources A bezor extracted from a devil swine is said to be very powerful, and the rendered fat of their bodies can be a useful base for candles, slaves, and waxes.