Pressure sensors detect and measure pressure and convert that into some kind of output.
We are not escalating our interactions with the players to engage esoteric knowledge, but rather to allow them to enjoy problem solving. This is the lens through which we examine the pressure plate.

There are a few types of pressure sensors: Strain based sensors require a physical material placed under strain such as a coil or strip of wire. There are also Resonant pressure sensors which measure frequency to determine if a machine is experiencing unexpected pressure. Finally there are thermal or ionization sensors measuring pressure via temperature change. There is a heating element balanced delicately, and any movement causes a change in temperature due to airflow.

A1: Slave Pits of the Undercity, By David Cook
20. TRICK STAIRS

A staircase goes down about 10’ and ends in a small landing with a door facing the stairs. The steps are made of flagstones set in mortar. The flagstones are loose.

This staircase will become a slide if the door to room is not opened properly. A thief may not detect the trap, but a dwarf could detect shifting stone if checked for. If the door is opened without first locking a secret catch (detectable only by a thief), the stairs will suddenly slant, creating a steep incline. Unless previous precautions have been taken, characters will slide into room #21, automatically losing surprise and initiative for the first round. Characters roped together, but not fastened to anything, will have even greater difficulties (the characters will be surprised for two segments and may not take any action during that time). After the door is closed and pressure released from the slope, the stairs will return to normal. If the door is opened after locking the catch, nothing will happen and the party will find stairs going down.
C1: The Hidden Shrine of Tamoachan by Harold Johnson & Jeff R. Leason
2. The Hall of Thrashing Canes

The sides of this corridor are carved to resemble walls of bamboo-like logs. The passage slopes down from a single door on its western leg, the lintel of which has been crafted to represent a stylized cavern entrance, to double doors of beaten bronze, worked to resemble a forest of seaweed

There is a pressure plate halfway down the hallway which triggers a trap. Several of the logs will swing out from either wall and buffet the paw towards the double doors. For tournament play, the trap will always work. For campaign adventure, the trap will be triggered on a 1 or 2 in 6. Characters will suffer no damage if the trap swings out behind them, stunning for 1-4 rounds. If a character is walking up the slope towards the trap, he or she will receive 1-6 points of damage from the trap, and will be stunned for 1-4 rounds. Once triggered, the stone logs will not swing back and will effectively block the passage, since they bar the way from ceiling to floor with only a 6” gap between the logs.
T1-4 Temple of Elemental Evil by Gary Gygax
103. PILLARED HALL
One hundred pounds of pressure on the floor at a point five feet in from the entry triggers a delayed-action mechanism. The pressure point limit is shown by X marks on the map. One round after this is triggered, a heavy barred grate drops and seals the doorway. Two harpies roost atop the two central eastern pillars, having special niches cut into the eastern faces 34 feet above the floor. When the grate crashes down, the harpies start singing. After one round, they cease their song and fly around, attacking any creature that makes a hostile gesture. If sounds of fighting occur here, the occupants of area 104 arrive 1 round later. If there is no such turmoil, these creatures arrive five full rounds after the grate's noisy descent.

Early pressure plate design should trend toward obviousness and small hit point tax. Escalating this should be both pressure plates that trigger nothing or are broken, or plates that work to allow the players to advance. (e.g. a plate that requires 800 pounds for a door to open). Consider the construction of the plate, specifically the medium in relation to what the players do to examine it. The pressure plate is not a critical feature. The simplest option when dealing with it is "I ignore it". This is a feature.  Pressure plates (and pits) are most effective when they are placed in areas where characters will be fleeing: tombs, in front of fear runes, outside of a room filled with 12 beholders.
Hack & Slash
Follow, Twitch, Newsletter, Support, Donate to end Cancer (5 Star Rating)
Posted by -C at 6/25/2020 07:00:00 AM

Island campaigns are so hot right now! One can never have enough places characters can stumble across that aren't on a map!
Hack & Slash
Follow, Twitch, Newsletter, Support, Donate to end Cancer (5 Star Rating)
Posted by -C at 6/24/2020 07:00:00 AM

This is the Frucissur Tower. It is inhabited by three Rakasta. They like to avoid people and argue with each other about planar schematics.
A nearby corrupted pond is spawning fish men of Dagon, so the Rakasta have used their vat to turn the local crows and ravens into a cult that believes they are gods. The raven men take care of all the fish men, as well as all the obnoxious business of daily life.
High res PDF with personalities, key, and vtt ready graphics available on Patreon! 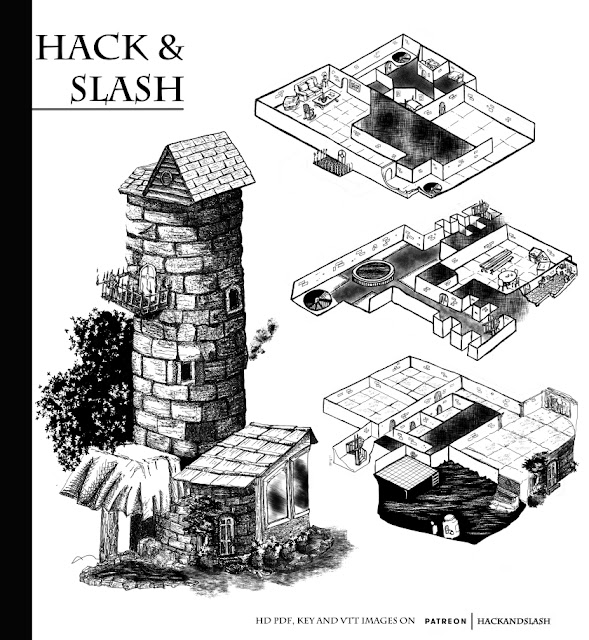 Due to Lulu's recent changes, Perdition is no longer in print. It's still available in PDF on DrivethruRPG, and I've changed the PDF to pay what you want.

Also, On Downtime and Demesnes has had a small price drop, and this is a reminder that everything I Kickstart or release is available in PDF to my Patreons for free.

And I recently finished that Gold and Glory module. Cravenpeter's Dream Auction  is a fun little thing. Gold and Glory uses savage worlds and playing cards to have sort of a solo (or group) adventure. It's super interesting, so I did an even weirder thing where you take the treasure in the adventure and try to buy magic items from narcissistic wizard, but he traps you in his dream and it gets strange.

Deaths continue to more than double from the Coronavirus every 30 days. Racism is so integral to america that protesting it seems like protesting America itself.

Now is not the time for me to speak, so I won't, beyond saying BLACK LIVES MATTER, and
encouraging you to contact your representative to let them know your concerns. The number that will put you in touch with your representative is the capital switchboard at  (202) 224-3121. 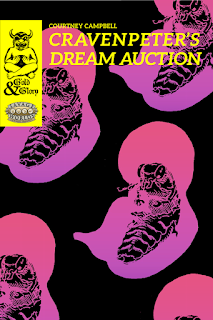 I do have to work. So, I'm happy to announce:

I've written a new module for GOLD AND GLORY, a savage worlds engine designed for solo or group dungeon crawls!

Rich items await in the auction of Maximillian Ernesto Cravenpeter Esquire the Mediocre. A powerful archmage is publicly retiring and is holding an auction for his eclectic and exotic items.
Maximillian, a powerful wizard in no way overcome with paranoia and petty concerns, has always had little trust or respect for anyone who would covet his things. As a security measure he has contacted the Green Feather agents—fae mesmerists, who have agreed to hold the auction in a dream within Maximillian’s psyche. This works flawlessly, protecting both the clients and the auctioned
objects, as long as no deep psychic disturbances exist.

Obviously, with a name like Cravenpeter, the chance for psychological trauma is surely nonexistent.

It's a fun jaunt into realms of dreams and weirdness. There's a talking moose, sexy bards, and noble knights. I've done the illustrations for it also.

If the chaos in this nation dies down, I've got quite a lot of work coming out and we'll see lots of new exciting things here.