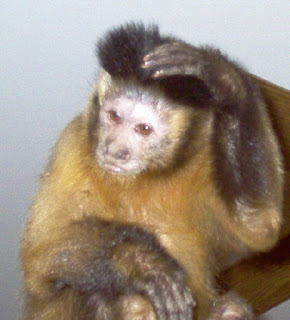 Courtney is three feet long and covered in fur.

He was born before the internet, in the age of Generation X, and grew up reading pulp-fantasy magazines like Asimov and Analog, and playing Dungeons and Dragons all over the Ozarks.

He's attended many schools and colleges and has a Bachelor of Arts in Art from the University of Arkansas in Fayetteville.

Beset by gratitude for the support given to assist the journey to holding a degree, Courtney served his country by joining the marines pre-9/11 and then spent twenty years working in mental health and substance abuse counseling. Five years of that was spent in rural Alaska, the Yukon-Kuskokwim delta, serving native youth at the McCann Inhalant treatment center. Returning to the Ozarks, he spent fifteen years working in a local hospital, working primarily with adolescents and women, as well as providing resources to change lives.

Courtney now writes and illustrates full time in the Ozarks and dotes on his daughter and nephews. He is proponent of civic responsibility, and votes in every election, as well as donating and supporting important causes such as RAINN, CRI, and progressive politicians. He has run for local office as a Green Party Candidate. He is an proponent of equal rights for all human beings, and stands against all human rights abuses. He also suffers from a form of Schitzophrena, which along with giving him a great deal of empathy for people struggling in life,  makes "drawing and writing for elf-games" a perfect career fit.

Buy some of my books!

Support me on Patreon!

Join me on Discord!