On The Thursday Trick: The Kissing Maiden 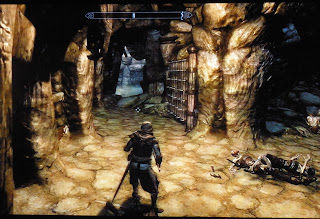 This post was originally published in December of 2011. If you're interested in Tricks and Traps like these, be sure to check out Artifices, Deceptions, and Dilemmas, collecting all of these along with beautiful illustrations.
In honor of the only trap in Skyrim to cause me to die. Twice.

Description: Often triggered by a pressure plate that releases tension, this trap swings forward impaling anyone standing in its way. This can be a single sharp post (al' la the original Conan movie), an entire wall, or even a statue of a beautiful woman. The trap often comes equipped with a counterweight for automatic rearming.

Detection: In the vast majority of cases this trap must be visible. It can be camouflaged or concealed, but the impaling mechanism can be seen. Common means of camouflaging the trap include vegetation growing on the mechanism, dim light, and angled walls and corners.

There are often blood spots on the floor and end point of the traps arc of execution. Even if successful, there will rarely be a body, due to its tendency to become impaled on the trap itself. If struck by a trap with a body already in it, damage might be mitigated. Bodies or skeletons hanging without supports on the wall might be another way to detect this trap.

More subtle means of detection include the hollow space where the counterweight resides. This will often be in either a wall or floor. The trap can be disarmed, but this almost universally results in the trap being triggered because it is under tension. Having a firm grip on the trap and releasing the tension slowly is one option, another is to not be where the trap is triggered.