On The Thursday Trick: Underground Hazards 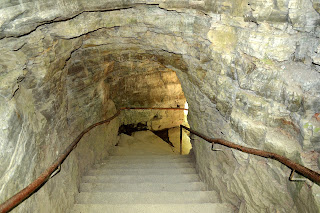 This post was originally published in December of 2011. If you're interested in Tricks and Traps like these, be sure to check out Artifices, Deceptions, and Dilemmas, collecting all of these along with beautiful illustrations.
Underground Hazards
Description: The Sub-world is not like the world above!

Dungeons aren't supermarkets and there are dangers that exist only beneath the world. What features can be used to create interesting organic underground spaces?

Accidents and falling. This is interesting, because this hazard must be applied and telegraphed before used. Environments underground are not always smooth and level. This is naturally taken into account in every version of Dungeons and Dragons by the movement rate. It is bad form to punish your players beyond that for the underground and cramped movement space.

But that doesn't mean you can't use uneven ground. You just have to clearly communicate to the players where it is and under what conditions it applies. You can say "This ground is uneven enough that if you wanted to cross it at full speed, you have to make a dexterity check." You can inform the players of unstable ledges that could cause them to fall if they walk along them unless a check is succeeded. It's not that the basic level of these checks should be difficult, but that emergent events in the hazardous environment creates tension, tactical puzzles, and entertainment.

Note how I'm just assuming you would never present any sort of space without a vertical element, right? We're in the future of Star Trek II, where three-dimensional thinking rules.

Another thing that must be considered underground is light. Without a light source, movement becomes more hazardous. Stating that any movement out of bright light requires a balance or dexterity check can create an environment that feels hostile, held back by the characters light. This is extremely compelling, because it psychologically mirrors the activities during the game. They are exploring the literal unknown dark, and straying from their light is dangerous.

Again, not in every environment, and not by surprise. Variety is the spice of life.

Rockfall. Man, rocks fall from space under the open sky. You can sure bet they fall underground. Have a talk with your miners and dwarves about the stability of the underground areas. Some might be very stable. Some might cause rockfall due to the use of some sonic or thunder damage. Some might be so unstable simply passing through the room is dangerous. This should be another factor in underground environments that reward characters for playing dwarves or taking the appropriate skills.

Dehydration and Exhaustion. When Dungeons and Dragons was a more focused game about exploring dungeons, there were explicit rules to handle these.


RESTING: After moving for 5 turns, the party must rest for 1 turn. One turn in 6 (one each hour of the adventure) must be spent resting. If the characters do not rest, they have a penalty of -1 on all "to hit" and damage rolls until they do rest.

Flooding. It is a truth universally acknowledged, that a single cave, in possession of adventures and near a large body of water, must be in want of a flood. They know it's coming before it happens. Water dripping from the ceiling, deep roaring noises, slick walls covered in algae. Often the best way for flooding to work, is to have it be a triggable factor in the environment. You're underground. The cave is multi level. Popping the pimple of the water will change that environment, depending on the situation, to the monsters advantage or yours.

Becoming lost is too large a topic to cover here. Disease is also a serious hazard, but is its own topic.

Detection/Disarming: Falling and balance hazards just must be full stop presented to the players. They literally function as hazardous zones. By their nature and how humans deal with movement, we can easily tell the stability of an area and our capacity to cross it. (As you would well know if you ever walked through the woods and crossed a stream). The thing is, even if we don't know how dangerous it is, we can almost always tell that it is some degree of dangerous. Of course you can make an argument that there might be some hidden danger, but we are playing a game and designing an encounter. Putting in a "F&%k you, you're prone/take x damage" isn't fun, or particularly game like. It's not a choice, it's a tax.

Rockfall. Anyone with the appropriate skill or background should absolutely be able to tell what's going on mechanically here. If they ask. When presenting rooms with rockfall, make sure you note what's on the floor. Dust, small stones, loose rocks, a boulder, spiderweb divots and cracks in the ground. If it is a rock fall area, then rocks fall. Before entering any area where it's stable unless shatters or fireballs start going off, dwarves and characters should have a  handwaved check to determine if that is the case. It's more interesting for the game if the know the consequences of using loud, damaging, area of effect spells.

Flooding. Players are going to shrug their shoulders and move ahead when you give them clues that the cavern will flood. They will say, "Well, I've got to go on the adventure!" They will often feel that they have no control over when you will flood the cave. So it's important to present it clearly to the player so they understand the dynamic. Is it a dangerous area with the risk of instant death, not only from crushing damage, but needing a way to breath water? Will it wash the characters away? Will it destroy the temple? If you're using as part of a load-bearing boss, then it really doesn't matter, right? To make it interesting in the game, the players have to understand the threat, and you should be able to communicate it to them, so they can make meaningful decisions.


This post might be more useful than the entire Dungeoneers Survival Guide. If you liked it, and you'd like to see more monthly posts, please consider joining our hierarchy on Patreon for special Discord roles!
Hack & Slash
Follow, Twitch, Newsletter, Support, Donate to end Cancer (5 Star Rating)
Posted by -C at 6/10/2021 07:00:00 AM