On the Thursday Trick, Vents, Sprays, and Agency

This post was originally published in September of 2011. If you're interested in Tricks and Traps like these, be sure to check out Artifices, Deceptions, and Dilemmas, collecting all of these along with beautiful illustrations.
Vents & Sprays (Vents/Sprays) 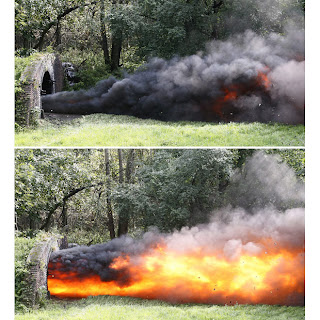 Description: These traps are characterized by a variety of factors that separate them from spells or ranged attack traps. First, they often involved gasses or liquids and because they are often sprayed out over a large area they have the property of never missing.

In some cases there is also an onset delay. This means these traps can be triggered and the effect happen in a certain amount of time (sprinklers in a room) or a delay before the substance affects the characters (such as a room filling with water.

If a to hit roll is required it will always ignore armor, but not necessarily shield bonuses. Saving throws may apply given the circumstance. Rods, Staves and Wands is the traditional saving throw for such attacks, allowing half damage or to avoid instant death.

Detection: These traps can be both the best kinds of traps, and the worst kinds of traps. Because they often have extremely negative properties, they can be ran in such a way where they are just Gotcha! traps, causing death or massive damage very quickly. However, this is an extremely poor way to run such traps, for several reasons. None of the vents and sprays above will be able to remove signs of their presence. Some examples
Do not forget that the vents and sprays also must come from somewhere. Nozzles, slots, slats or shutters will be visible places where the substances are expelled.