On the Ecology of the Cockatrice

"Those are stone hens up in that den. You'll be a work of art coming out." -Ophid, Country rustic 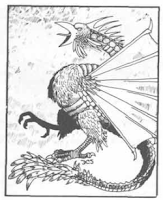