These “mechanical” triggers are very simple—any object that covers a pit that doesn’t look like the a pit is a lid. This also refers to false coverings that open into a trap. Prodding and tapping are very effective at detecting these kinds of traps. Pits, like pressure plates, usually have a percentage chance to not be triggered. Since lids are literal covers for holes, water usually tends to be very effective in detecting these traps.

There are different types of pits lids: open, breakaway, latch, teeter-totter, and illusion.

Breakaway pits are camouflaged, but any testing or prodding will indicate that the floor is not solid, or that the covering has some give to it. Consider the terrain and the material used to cover the breakaway pit. Leaves and sticks outside, a carpet indoors.

Latch pits have moving parts. There is some support for the latch, and usually some way for the latch to reset. This means a wheel or gear hidden nearby. Also, it is more difficult to hide the seam of a latched pit.

Teeter-totter pits are easy enough to detect by prodding, but as a side effect from heavy use, may not center correctly. One side may be raised up an inch or more, while the other is low. Or if it is poorly made, the wrong side of the lid could be visible.

Illusionary pits create a very realistic looking floor, making detection by vision almost impossible. The illusion isn’t solid and doesn’t interact with the environment. Detect magic makes it obvious, but fog rolling along the ground will drop right through. It doesn’t block sound or airflow, all of which can provide clues to the illusion. 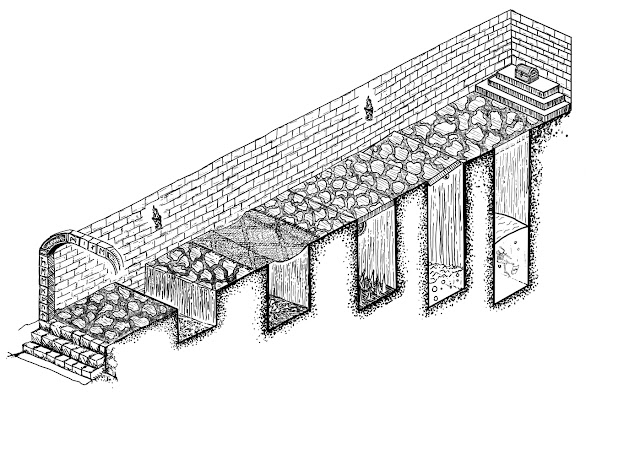 B2: Keep on the Borderlands by Gary Gygax

A. KOBOLD LAIR: There is a 2 in 6 chance that as the group enters the cave-like tunnel, 8 kobolds will come out from hiding in the trees above and attack. . .Each carries d8 silver pieces.

Note: 30´ inside the entrance is a pit (B). There is a 3 in 6 chance that each person in the front rank will fall in unless they are probing ahead. There is a 1 in 6 chance that individuals in the second rank will also fall in, but only if they are close to the first rank and the character ahead has fallen in. The pit is 10´ deep, and those falling in will take 1-6 points of damage. The pit lid will close, and persons within cannot escape without aid from the outside. The noise will attract creatures from areas 1. and 2. Planks for crossing the pit are stored at #1., beyond.

Early pits should be open, and be an exercise in players finding a way to cross. Open pits should be placed in areas where other action will be taking place. These early open pits can be crossed simply by dropping in, walking across, and climbing out the other end, to heights up to 15´. For any medium-sized adventurer climbing out of such a pit is a trivial matter. Once pit depths reach 20´it begins to get more difficult. They may attempt to jump across, use planks or poles, or try to lasso something on the other side.
Breakaway lids should be considered in room or hallway descriptions and accounted for when first describing a room or area. It is very important to be clear when identifying breakaway lids in description. In most cases, anyone who asks about the floor or what’s on it should be told, “It looks like it’s covering a pit.” If the pit is particularly well hidden, i.e. if the floor itself is buried in leaves, and there’s no way to tell that they are covering a pit, an appropriate response to someone investigating the floor would be “There is entirely too much debris and scattered leaves to even tell there is a floor underneath them.”
Latch and teeter-totter pits will frequently not be described or visible, and are the most classic X in 6 style of triggering pit. However, anyone who specifically examining the floor specifically should be able to spot them. As these evolve and you move away from kobold and goblin pits, to latch pits designed by dwarves and thieves, the players should have access to more powerful tools (e.g. eyes of the eagle, detect traps, true seeing) in addition to high level thieves, monks, and rogues. The presence of well hidden latch pits should be telegraphed by the environment being one where a master trap-maker would work.
Illusion pits are rare and for good reason. They are silent and can be quite lethal. “Early” illusionary pits could be old magic that’s failing, looking like static occasionally or flickering in and out of visibility. Or they could have obviously wrong things, like water flowing from a fountain onto the floor where it just disappears into the ground, or a hallway covered in debris, everywhere but the illusion. For higher level characters, it is both the quickness and the silence of such a pit that’s dangerous. It’s possible to have an illusion pit cover a deadly substance like acid or a paralytic gelatinous ooze up to 15 feet down, which a character would fall in under one second. That isn’t enough time to even shout out. To the other characters it would appear that the person just vanished. Even someone looking directly at the person falling in would be hard pressed to tell what happened, seeing them quiet literally fall though the floor. The other triggers all take more time to trigger and will alert everyone to their presence. Breakaway lids will fall in, teeter-totter lids will swing, latches will fall open, often with a loud bang, alerting nearby monsters like a dinner bell, but illusion pits rarely will make an audible sound at all. Fortunately they are visible to detect magic, and detect as traps, making them easy prey for players prepared for danger.
Hack & Slash
Follow, Twitch, Newsletter, Support, Donate to end Cancer (5 Star Rating)
Posted by -C at 12/30/2020 07:54:00 AM