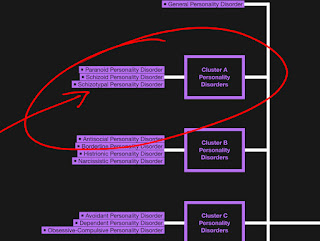 I don't hate anyone. Except maybe my mother, but she pushed me down the stairs when I was just a few years old, and I'm not even sure I hate her.

I try, very hard, to not believe anything. I've attached a little chart, with an arrow pointing to where I am. The whole chart is here.

This means a lot of things. Schitzotypal people may not experience the emotion of loneliness. They have trouble with emotional regulation. Also, and most importantly for this—They can have no concern for social norms and ingroup behavior.

This is why a conservative said that "[Courtney] is one of the bad guys" and liberals say "You have a history of supporting "blue lives matter"" or that "[Courtney] is an MRA." I had never even met the guy who accused me of being a "blue lives matter" person, but they were being fed quotes and information by someone else. Some guy this week said to me he doesn't support people who hate him. How did they get the idea that hate was in my heart?

When one is observational and non-judgmental in their writing, frequently people see what they wish to see reflected. People cannot help but have their own biases that influence the things they consume.  It requires constant effort and supervision to have the discipline to avoid falling prey to groupthink, propaganda, and manipulation. No one is immune. This week, a video was shown that reinforced my belief, and it wasn't until someone checked my comment that the due diligence was done to discover it was propaganda, a falsehood presented that spoke to my wishes and not the truth. People who think they are immune or too smart are the most vulnerable. The ego seeks to protect itself. Someone who doesn't conform is always a threat to that.

People know very little. I can speak effectively on just a few topics. Dungeons & Dragons. Mental health, hospital administration, and government oversight of hospitals, I posses some training and education in painting, ink drawing, technical and creative writing and movies. Recreationally I can speak somewhat authoritatively about game and tabletop design. That's it. Of course opinions are possessed, but that's what they are.

This is not supposed to happen—I'm supposed to keep my mouth shut and keep from alienating people.

But I've spent the last year watching cops beat people to death, and then watching people beat cops to death this week. This is a link to ideologically possessed American citizens beating a Iraqi war-veteran Capitol police officer to death (Caution: Video of brutal murder), while people in militarized camouflage enter into a building. Here's a different perspective of the same murder. Here's a video of completely overwhelmed officers telling people they can't come in while people file past them. Here's a video of a black police officer taunting people away from the senate room. And here's the video where that same door, locked only seconds after he passed was broken through. (Caution: Fatal Gun Violence)

The door broke open, and a female veteran was shot, one time by a secret service agent, after which the morale broke. If it had not; even if there were a dozen men with pistols, they would have been over-run. That gunshot likely stopped the murder of many more of our political leaders that day.

We are at the start of a journey. There were "only" five deaths at the Capitol on 1/6/21. Since then, one officer has committed suicide, (you can watch the spread of suicide grow from ~13 out of every 100,000 in 2011 to over 20 out of every 100,000 in 2020 here, a 150% increase in suicide rates.) . Tent cities are springing up around our nation and food banks are running out of food and hospitals are overflowing. This is not a sign that this is going to end. After all, it didn't magically end when they imprisoned Hitler after he tried the beer hall putsch. He just wrote Mien Kampf in prison and then committed the fucking holocaust.

Whether he is impeached or not, put in prison or not, Trump is going to start a news network.

Government, so my reading of western historians and philosophers have told me, is about balancing personal liberty with the needs of the state. You see, those are the two sides of the coin, Conservative and Liberal. There are endless nuances of course, but claiming one is terrible or the enemy or is evil has nothing to do with the actual management of human beings.

To Wit: Nurses and aides have helped many people with dementia walk to the bathroom and held them up and cleaned them while they purged their bladder and bowels, measuring the output as they are helped back to bed. Health workers spend time with women in groups helping them process their abuse and rape and post-partum depression. A group of therapists do a therapeutic restraint on a child who's acting out so he can get a hug or some physical contact, because between the fetal alcohol syndrome and delayed development, he has no way to process watching his father choke his mother to death on a boat sitting on the Kuskokwim. I can never unhave these memories.

None of those things above have anything to do the needs of the state. The state can do anything they want in response to those situations. In the United States, the metric of federal funding is primarily what costs the least. Seven million a year for a treatment center is cheaper than the social cost of police, fire, and ambulance services for not addressing the social issues. In some rich first world countries the metric is social good. In Nazi Germany, these people were simply gassed and killed. The people choose or abstain.

We don't know anything. Why, even though we don't know anything, do we not believe the propaganda about the election being "stolen"? Well, because I've spent time working with government employees. The people who are asked to provide evidence, set up a website where all of their verifiable data can be found. Then on camera they admitted that there is fraud in every election, and itemized every item that was fraudulent, and "unknown". Then they specified the agencies that were looking into that fraud. They filmed the entire voting count process, and everyone who's watched the whole sixteen+ hour video is confident of its security. Conversely, the people claiming election fraud filed 62?! lawsuits, 61 of which they lost.

Anyone who has spent any time with lawyers and the court system, knows that even before trial, people are required to submit evidence. This isn't one single court. 61 out of 62 times in dozens of different states these cases were dismissed, thrown out, or otherwise removed. Is it possible that this is some sort of nationwide conspiracy of primarily conservative judges who have been baffled by some deep state shenanigans? It's possible for frogs to fall out of the fucking sky, but it ain't very likely, you know? In your experience are judges and lawyers the type to screw around with the law they have devoted their lives to?

There was months to present and collect evidence, and none was ever presented. So likely not, yeah? It seems equally unlikely that anti-fascist actors were engaged in a false flag operation with trump tattoos, long beards, to disrupt an election they won. It's farcical on the face of it.

What is clear, is that modern fascism isn't ordered marches, posters, and 'youth camps', it's anti-vaxx stories on facebook, shared and reshared in mom groups many of whom haven't learned critical thinking skills, or have them impaired due to fear of something happening to their children. It's propaganda networks that have let fascist and racist ideology grow, to the point where slavers flags, people wearing shirts that celebrate Auschwitz and a shirt that says six million dead humans wasn't enough stained the sanctity of our capitol.

It took 157 years, but the confederacy finally had their flag flown in the seat of democratic power. It makes me physically ill that the 620,000 civil war dead are disgraced with that blasphemy.

Conservatives aren't the enemy. Liberals aren't the enemy. Extremists, fascists, and racists are. Posting this  makes me a target for a future fascist takeover. Because I've associated with conservatives I'm already a target for a future Communist takeover. It would be best if I didn't say anything. What are we going to do with these propaganda networks and this frustration and hate and misery? I don't have the solution, But I know that staying silent isn't it.

First they came for the democrats, and. . . well, even though I'm a registered independent and have run as a green party candidate for local office, I'm going to speak up.

Human rights activist Peter Tatchell states that going against people who have different views and challenging them is the best way to move forward. He told Index: “Free speech does not mean giving bigots a free pass. It includes the right and moral imperative to challenge, oppose and protest bigoted views. Bad ideas are most effectively defeated by good ideas – backed up by ethics, reason – rather than by bans and censorship.” - LGBTQ and Human Rights activist Peter Tatchell

Hi. If you'd like to discuss this, you can visit me on Discord, Twitch, or Patreon. There, we can talk about how my clinical paranoia intersects with the actual non-imaginary groups of harassers who threaten me on the regular because I live in their head, rent-free. This is not a normal post! I mostly post great art and D&D content. I'm also a patriot that loves my country, even though it is horribly flawed. As Anne Frank said, we are a bundle of contradictions. There is hope. If someone doesn't like me because of what I wrote here, I don't want to be liked by them.