On the Clerics Devotion 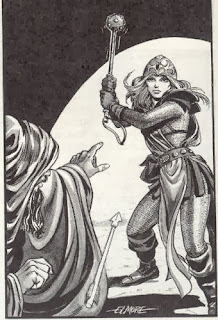 Clerics are all messed up.

I run a lot of classic style (basic/expert and 1st edition) games and I don't use clerics.

Problems include people feeling like they need to take a cleric, a complete dissociation with how polytheistic religions actually worked, and questions about how society looks if it can eradicate disease and raise the dead.

If I do have to run clerics, I follow the advice located in Men and Magic.

"The number in each column opposite each applicable character indicates the number of spells of each level that can be used (remembered during any single adventure) by that character."

What if it meant exactly what the meanings of the words implied it means? (What are the chances, right?)

What if spells can only be used during any single adventure.

The cleric gains her spells because she is seeking out danger for her deity. If she stays home, she is granted no spells. Only when she leaves home to defeat evil does she have access to her magic.
But mostly I don't use them.