On Hoard of the Dragon Queen Resources Part I

Here are the first two resources I'm posting for use in the campaign. They are more fleshed out and detailed versions of the illustrations and statistics I used in my game. 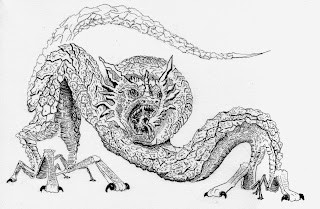 Quadrupedal Dinosaur like reptiles, with an arched back, and long legs. From the side they appear triangle shaped. Their heads extend on long necks from the upper middle of their front back. They can stand on two legs, using their claws to set devious traps and manipulate tools. When they do so, their serpentine long necks swivel to either side of their body. They can spit caustic acid.
Dragon dogs are formed when a dragon egg is broken open, and the many small worms are fed to humans. From 20-200 can gestate in each human, eating them from the inside out and killing the host when they are born. Each dragon egg produces approximately 1,000 dragon dogs. Other mammals such as cows or dogs can be used as hosts, but tend to produce dumber and less useful dragon dogs.
Medium Dragon, Lawful Evil
AC 12 (Dexterity)
Hit Points 5 (2d6-2)
Speed 30 ft.
Stats: -2'/+2'/-1' | -1/-2'/-1;
Senses: Darkvision, PP 8,
Languages: Common, Draconic,
CR 1/4 (50 XP)
Pack Tactics: Dragon dogs have advantage on attack rolls if an ally of theirs is in combat.
Actions
Bite +4/1d4+2
Acid Spit +4/1d4+2 (30/120) 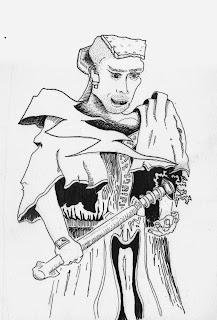