On the Hoard of the Dragon Queen: Episode 6, Part I

Let's get this series finished before the end of the year when it's time for me to run it.

Before going any further, I'd like to take a minute to say Hoard of the Dragon Queen and Rise of Tiamat together is worthy of being a classic. Here's why:


"Tyranny of Dragons is a big, sprawling adventure that covers many levels of play and a huge swath of the Forgotten Realms. This book outlines the overall structure of the adventure and presents many episodes and events with which to challenge the characters as they investigate the nefarious plots of the Cult of the Dragon. This is not, however, a script to be read allowed with stage directions that must be followed. Tyranny of Dragons does not hold your hand and guide you step-by-step from the story's beginning to its inevitable conclusion. Instead, it presents people, creatures, locations, and situations for the adventurers to explore and interact with in a constantly changing, lively way.
You, the Dungeon Master, play a vital role. The creators of Tyranny of Dragons have tried to foresee the most likely courses of action that the characters might take in the adventure. However, D&D players are curious and unpredictable, and Faerun is immense and filled with possibility. In a scenario as open-ended as this one, it is all but guaranteed that at some point during the adventure—and possibly at many points—the players will develop their own ideas about how to handle a situation or how to deal with the cult. And just like that, they'll be off and running in directions that aren't covered by this book. These kinds of situations put a DM's skill to the test—but they also produce some of the greatest gaming moments and memories".—Rise of Tiamat, Steve Winter

It doesn't say Hoard of the Dragon Queen.

It doesn't say the Rise of Tiamat.

It says "Tyranny of Dragons".

This is not an introductory module. This is not an intermediate adventure path. This is a two book supplement for skilled Dungeon Masters that describes the most important events taking place in the Forgotten Realms. It's supplemented by events in Adventurer's League that take place around the Moonsea. And it leaves a ton of space open for your own adventures.

It's not perfect, but it is under the dual constraint of needing to be palatable for public play, as well as hitting what I assume is a tight page count. A company like WotC doesn't have the freedom to double (triple, quadruple) page count just because more stuff was turned in, like an OSR publisher like +James Raggi. 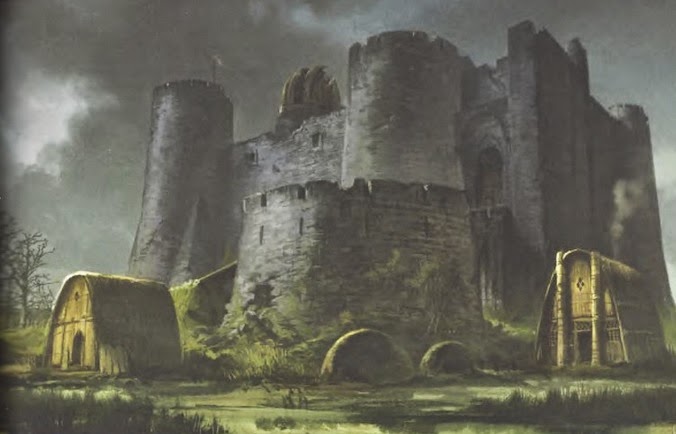 So this series is my answer to how I'd solve the issues in the adventure. +Daniel Davis has another. You will have your own. And the adventure is one of the best that's ever been published by the brand holder of Dungeons & Dragons. It contains surprises and creative things I'd never thought I'd see in an official product.

Someone out there might say "Why am I paying for the adventure if I have to do extra work?" That person obviously isn't playing Dungeons & Dragons 20 hours a week, if ever. I've never run an adventure that didn't require a lot of extra "work", or as I like to call it, "fun". Even one-shots that I've run include pre-generated characters, pictures, props, etc. You're paying for not having to come up with structure, ideas, names, history, calendars, and plots—you're paying for a framework to put your own creativity over, which is exactly what a module series about an evil cult trying to destroy the world does!

This is one of the best sections in the book. (Crazy spoilers abound ahead!!)

You travel through the Mere of Dead Men to reach Castle Naerytar, where various factions of the cult vie for power! There are a bunch of different ways to approach what happens in the castle, but first you have to reach it.

I started this section by looking into the Mere of Dead Men and the Dragon(s) that inhabit it. There's an extensive article on the dragons from Dragon Magazine #257 that provides a lot of insight into the area and the dragons. In addition, there is a series of adventures into the Mere from Dungeon Magazine 69-73. Here is the map from that series of adventures, with each of the sites listed detailed in the series.

This series of adventures also revolves around the black dragons and their quest for powerful magic items and it provides a lot of history. A whole miniature campaign can be played in this section of the adventure.  I almost certainly will run it as a miniature hexcrawl, allowing them to investigate and explore any of the sites in the swamp that seem interesting. A short summary of the relevant parts of each adventure from the magazine are listed below.

Slave Vats of the Yuan-Ti, Dungeon 69: Iniarv's Tower was the tower of a Demi-lich. Wolfhill's house was a front for human cloning experiments of the Yuan-ti. The hill has an aura of causing spells to misfire and creatures to grow to gigantic size.
Ssscaly Things, Dungeon #70: There is a tribe of lizard men called the Three Towers Tribe. There is an abandoned fort near the Mornhaven towers. Spells within 1 mile of the towers have a 1 in 4 chance of becoming permanent. The towers were built by elven sisters, who tried to sink them to contain a demon.
Dreadful Vestiges, Dungeon #71: Holk House was a sanctuary for priests of Eldath, goddess of peace, pools, and springs, now haunted by spirits of Myrkul worshipers. Holk House is now partially submerged, and protected by powerful wards that nullify transmutation and conjuration spells. The last known resident was a cursed blackguard.
Mistress on the Mere, Dungeon #72: A half-elven wizard built Castle Naerytar (maybe). It was inhabited by Adele Astrolara for a while, a member of the Academy of Stargazers, a female only guild of mages. She was secretly a penanggalan. There is a ruined road of logs and mud heading northeast from the castle to the high road.
Eye of Myrkul, Dungeon #73: Chardansearavitriol (Ebondeath) a great dragon built his lair in 631 DR, and vanished in 922 DR, secretly becoming a dracolich, and eventually a demi-dracolich. The Ulhtower exudes a radiance that prevents the turning of undead and grants all devout followers of Myrkul and undead a protection from good effect.

The Mere itself is difficult to traverse. Here is some text from the Eye of Myrkul.

Travelers in the Mere of Dead Men find the saltwater swamp to be a slow and treacherous passage. In many places the dark waters are deep enough to permit a flat-bottomed skiff to pass, but in other locations small islands rise from brackish pools and are overrun with riotous twisted vegetation. The ancient remains of long-fallen humans, demi-humans, and orcs are scattered everywhere as are the bones of many less identifiable creatures. . . Beings with movement rates of 12 [Ed. 30 feet] can cover approximately two miles a day in the swamp. . . given the thick vegitation, skiff-borne travelers through the Mere are reduced to a base movement rate of 4 [Ed. 10 feet] and can cover approximately eight miles per day, assuming ten hours of travel.

And it is filled with many deadly creatures


Encounters within the Mere are frequent and often deadly. The DM should check for a random encounter six times per day, with a 4-in-10 chance of an encounter. . .The DM should feel free to add any additional random encounters appropriate for a relatively cold, salt-water swamp set in the northern Realms. In particular, many monsters unique to the marshes and swamps of the Realms make their homes in the Mere, including aballins, alguduirs (swamp dragons), flying fangs (flying snakes), gulguthydrae, meazels, nyths, sewerms, skuz, slithermorphs, swamp rohches, thessalhydrae, and xantravars (stinging horrors). Also, many of the more commonly known denizens of cold marshes and swamps are  found within the Mere, including behirs, bullywugs, giant leeches, giant lizards, hydrae, lizard men, muck-dwellers, scrags, shambling mounds, snakes, toads, and will o'wisps. . . encounters with undead of all sorts—particularly ghouls, skeletons, and zombies—are common in the western reaches of the Mere.

I would use that information as the basis for a wandering monster and hexploration table. I'd provide links to Wizardawn, which is what I would use to generate it, but it appears to be down currently.

Travelling to the castle

The two hundred miles north of Waterdeep they travel will put them on the north side of the Mere, which is pretty much where they will have to be to have the castle be 15 miles away. This apparently means they will be travelling south into the swamp.

The movement rates in the module appear to be consistent with those above. Somewhere around 7-8 miles a day. There is a clearly marked trail that the characters can follow, but at the scale it is at, there should be a lot of interesting sites visible from either side as they travel, perhaps tempting them off course.

Our first bit of navigation of a skilled challenge begins here. If the characters use the campsite, they are approached by lizard-men, who "won't negotiate or converse with characters", but their number also contains a lizard-man named Snapjaw, who can become an ally.

This, I believe is a feature, not a bug—an encounter where the point is to punish those players who take a scorched earth policy to enemies, and reward those who think to take prisoners.

As mentioned, the book contains a bunch of interactions that are more like wandering fights, whereas constructing a table using the options above will give a much more Forgotten Realms flavor to the adventure. I would share my person encounter table, but considering the content of some of what I'm going to use, I'm not entirely sure it's covered under the OGL. Googling the monsters above should give you what you need.

Keep tuned for the second part of Episode 6, the castle itself. . .

Hack & Slash If you're liking this series on Hoard of the Dragon Queen, you might want to subscribe to get further updates, reviews of Tiamat, and not miss any exciting posts. If you find yourself using this or any of my other resources in play consider Patronage! And you can always follow me on G+ to talk about gaming and even play online with me.
Follow, Google +, Newsletter, Support
Posted by -C at 12/16/2014 07:00:00 AM