Before I used to work and write on my own time. Now my work is making things, so that's where the writing goes.

What do you want to do?

Do I want to fix 5th edition modules? Do I want to kevetch about the current drama of the week? Do I want to review the history of gaming and quibble over what to call each of them? Not professionally, no.
Times do change and blogs have fallen out of favor. This is completely the way of things though, they come in and out of fashion. Is Grognardia publishing daily? Once in the beginning, and now after the end of the before times.
Some of the major theme and issues of the day aren't really relevant to me. It's good to see new voices. I've also been a bit gun-shy, because hostility comes with attention. I mean attention comes with hostility. Don't you want to squeeze a cute kitten? Maybe those are different things.
My life is radically different from when I worked for other people. That impact made it hard to—well, all of it. It's crazy, and unfair, and I feel very helpless in the face of enormity. On the other hand, things are just ducky for me, which is worse somehow?
A fair amount is surreal and absurd. I draw pictures and write words about weird fantasy stuff. There are people who are convinced I'm blinded and have been led astray, in my malign quest to. . . draw pictures and write words about weird fantasy stuff.  Online is only a part of real life. It's a place where people posture and engage in (literal) social climbing.
But guys, I really like this job. I don't have to leave the house, and I get to make beautiful picture pages. It has led me to consider what I really want to be doing with my 'brand'. It seems like a terrible word, until you consider it means "people putting work into communicating clearly what they can expect from my people". And when viewed like that, I'm quite fond of it. It feels very much like self-improvement.
It forces you to ask the question to yourself "what is it that you WANT people to expect from you?"
Good question. 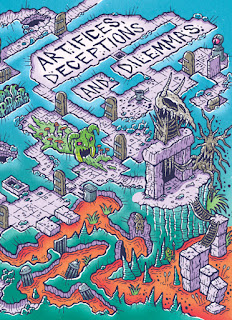 I'm writing a new cool book filled with monsters. My last book "Artifices, Deceptions, & Dilemmas" is out in print from amazon and DTRPG. Frog God Games just published "Alchemy" which I wrote like a decade ago. I got a nice leather bound copy, and it's the book I wrote. I just turned around and started using it in my games.
I mean, I wrote it because of all those hours reading Aurora's Whole Realms Catalog. And now it's here and that's cool.
I've been working and hanging out more in public using twitch. It's like having an open studio. I've met lots of cool people. One of my mods is actually successfully kickstarting a bestiary for Broadsword.  It's interesting, compared to Twitter. Twitter takes anything you say, and broadcasts it to the entire world. But Twitter goes further, and shows it to people who respond strongest. It's a literal wrath engine, full of corrupt darkness and black smoke. The future is weird. Cryptocurrency is literally a captain planet bad guy. It spits out pollution and cash.
Twitch requires people to like you. So everyone is nice. You might think it's fake nice, but you spend so much time with these people, you realize how nice it is to be around happy nice people. It's nice. I'm a pretty positive person, and it's nice to spend time around people who don't let challenges turn them into bitter angry people. It helps me!
I'm having a good time. You should come have a good time with me. I stream as agonarchartist on twitch. You can ask me things. I stream Monday - Wednesday starting at 2 pm CST till early evening. Sometimes I stream on Friday afternoons and Saturday and Sunday nights, when I'm not spending time with my daughter.  I'm mostly streaming me drawing stuff. I've really been working on my art lately. You can see a lot of it in my latest book. Sunday nights we are playing mind-flayers in Stellaris.
There's a lot of good things happening. There's like a constant stream of superhero shows. A ton more niche stuff is getting bigger treatments. We are almost full post-modern deconstruction with the superheroes, which is fascinating to watch. I got my vaccine against the plague, which is just incredible. I saw that Kelty is kickstarting The Bleakness which I backed. It's in the last 48 hours!!  I'm also excited about the high quality print I've got coming of Ascendant. I hear someday Break! is going to release. It is an era of plenty.
I'm spending a lot of time around creatives and other hard-working professionals. I'm spending time with my family being a father. I'm spending time with a community I'm growing full of people who are incredible-I mean I'd say surprisingly so. People will just wander in and be these amazingly talented artists.
I've got plans for the blog too, but talking about things is always secondary to doing them. That said, I'm in the process of restoring the Links to Wisdom dead links, I'll be posting both the old and new ecologies, restoring the traps/tricks, working on new islands and towers. And more.
Did I mention more?
If you want to help out, and can spare a dime, I've got a Patreon.
Hack & Slash