On the Generation of Treasure 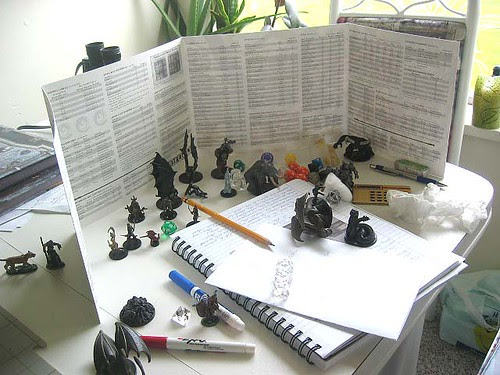 Current Players should not read this treatise on the generation of treasure.

This is for a upcoming section of the dwarven fortress my group is currently exploring. It is an 80+ room complex (for now) with two lower cavern levels remaining to be mapped.

I have (on average) a five person party, in a first edition game without using the training rules. Supplementing the rules are a bunch of domain activities designed to eat up the player gold, including carousing, research, information gathering, hijinks, and more.

Average experience for a mixed party that is first level to reach second level is about 1750. With five players that's 8750xp. I'm giving 1 experience point per gold piece (with less awarded for weaker encounters - nice bit of text from Gygax there), meaning once I give out 8000 gp the party should gain a level. I'm going to set out 4 times that much treasure to account for a variety of factors listed before, such as henchmen, missing treasure, PC death, and other ways that it can leave the campaign.

The gold total above is a generous amount, especially due to the ability of players to convert gold to experience. I'm shooting high for a couple of reasons; this is game focused on Domain play with relatively early and rapid advancement, and it allows me to be devious with treasure. .

As I said, I have 80 rooms. I know that my 1st edition room stocking table says that 20% of those rooms will contain treasure - either loose or guarded by a monster. So I'm going to take my total gold (45000) and divide it by the number of rooms with treasure (.2 x 80 = 16). (45000/16) Means each room should have a total of 2812.5 gp of treasure. I round that down to 2800. Then, since a variety of treasure should be found, I separate that out into parcels. Usually I go for 4-6 parcels (more for lower level characters) but since 28 divides by 7 so nicely and that gives us smaller parcels, I come up with a figure of 400gp per parcel and I should distribute approximately 112 parcels throughout the dungeon.

I picked 7 parcels, because I want a larger variety of treasure and more options to put something valuable in a room that doesn't come up as treasure - often I'll put a silk screen or a rug in an otherwise 'empty room' (i.e. a room without an encounter in it e.g. a 'monster' 'trick/trap' or 'treasure') and that will have value. These values above give the range for this number, but none of the above needs be done - you can just set what you think is an appropriate parcel size! Some guidelines for this and several other generation methods are contained in my DM1: Interesting Treasure document.

Now that I have my parcel size, I draw my map and number all my rooms. Then, I roll on the stocking table. I've already done 27 of the rooms, so I'll roll the d20 for the next 10 rooms.

30 is actually a secret room, so I'll have to come up with something special for that. For this example, I'm going to focus on rooms 32 and 34.

32 is a small alcove, and it's behind an area where a bunch of deadly monsters have set up shop, so it will likely either be an undead creature, a construct or one of the other creatures that can survive or be found in dungeons listed in Appendix E: Dungeon Monsters from DM2

34 is a closed room in a fairly central area, so it is likely a storeroom of some kind. 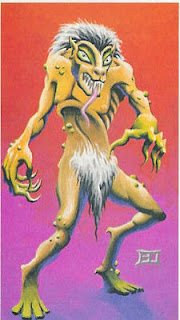 To provide more character to these areas, I roll on the random room table to determine the type of room that these extend from. I use the tables from my DM2: Tricks, Empty Rooms,and Basic Trap Design document. I get gallery for room 28 (from which 32 projects) and Treasury for my second roll (from which 34 is a closed door)

For room 32, I pick 'ghoul' as my monster, because it can eat the flesh left from the blood drained corpses in the outer room. I check the treasure type for ghoul. I will design some tactics and interest around the monster, ghouls after all are not mindless, but again, that's not what we're interested in here. I use the Hackmaster stats for my monsters and it says treasure type is B, and T. B as a hoard type contains a variety of items - a chance for everything off the list. T indicates 1-4 scrolls.

I do not roll on the base value of the hoard table because I'm not using a naturalistic method of treasure distribution or the default parcel value. (I'm using the classic values)

My my. My lucky players:

This is a somewhat lucky roll, being that the advantage of gems and magic items is that they are not capped by parcel value. I then check to see what the treasure is contained in (roll a d10, get a 1), and got bags or sacks. I think only the coins will be in bags or sacks, and some of the furnishings will likely be something else that holds treasure.I check my 1 in 20 chances for treasure to be trapped or hidden and get an 11 and a 20. Since the treasure is neither trapped nor hidden I go ahead and determine the furnishings first.

Furnishings & Clothing:
I have three parcels, each worth 400 gp for a total of 1200 gp. I want something large that can contain things, and figure any clothing wouldn't be in very good shape. I roll percentiles on the Furnishings table and get blanket, so I keep rolling. My next roll gives me a box, better, but I want more, so one more time. My third roll gives me an armchair. I treat the box as one of those storage ottomans.I read over the list of adjectives and types of improvements to furnishings and come up with the following.

Jeweled Items:
I roll percentiles and get an aiguillette

The sack is tied with a black cord (made from horsehair) the end of which has a platinum aiguillette studded with 3 very small very fine rubies. (400 gp)

Gems:
I roll on the gem table, starting with a precious stone, (because our parcel size is 400gp). I roll for size and quality. I get a Kunzite with minor inclusions. I roll d300/2+75 for the value of the gem (because gems and artwork are not tied to parcel size) and get 202gp


Magic Items:
I roll on the magic item table. I get armor and shields and a scroll. Since I'm already giving out 1-4 scrolls (hello ghoul), I re-roll the scroll value and get Miscellaneous magic, bags. I also don't tie magic items into parcel value - I'm using the Hackmaster tables, but any random generation table will work. I use my armor table to make the armor interesting (those are still in progress and not available to the public, my interesting weapon table (one and two) can be found on the blog). And of course I add the scrolls here.

Beneath the gem sits a single suit of human sized iron mail, (Chain-mail +1) anyone who picks it up instantly notices that it weighs nearly nothing (armor bulkiness is -non. Penalties to casting and thief skills still apply but has no encumbrance). Underneath the mail sits a small fleece pouch (Pouch of Accessibility) wedged in-between 3 scrolls (Scroll-protection from lycanthropes, Scroll-Cursed, Scroll-Cleric, spell levels 1,2,4,5,6,6)

Put this all together, and bold (I box in pencil) all the immediately visible things and you get:
An ornate iron dwarven armchair, with decorative cobalt inlay. (900gp) 65lbs. + Bulky. A hollow slate ottoman with a removable lid, upholstered in woven twill. (200 gp) 35lbs. + Bulky. Covered in a chiffon blanket (60gp)  400 gold coins, 200 hard silver, and 80 platinum are in a moleskin sack (10gp) next to the chair. The sack is tied with a black cord (made from horsehair) the end of which has a platinum aiguillette studded with 3 very small very fine rubies. (400 gp) Inside the ottoman is a single Kunzite gem with minor inclusions (202gp) Beneath the gem sits a single suit of human sized iron mail, (Chain-mail +1) anyone who picks it up instantly notices that it weighs nearly nothing (armor bulkiness is -non. Penalties to casting and thief skills still apply but has no encumbrance). Underneath the mail sits a small fleece pouch (Pouch of Accessibility) wedged in-between 3 scrolls (Scroll-protection from lycanthropes, Scroll-Cursed, Scroll-Cleric, spell levels 1,2,4,5,6,6)
Posted by -C at 10/06/2011 07:36:00 AM

Email ThisBlogThis!Share to TwitterShare to FacebookShare to Pinterest
Labels: treasure