On Downtime On Time 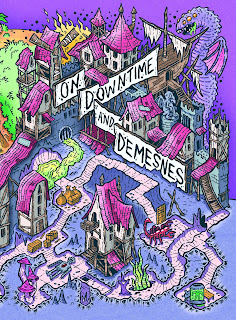 I finished my Kickstarter on time.
5th Edition
Basic D&D

People's responses have been good.

"I love the Noble Patron random list in Downtime and Demesnes! Very creative and very... useful for the... discerning Judge..."

"I really liked the addition of lapidary hirelings (I know that's a weird thing to like, but making gems more of a subgame sounds like it could be fun)"

"@Agonarch The book is good yes. but that's not surprising. the kickass cover surprised me!"

"This book was worth every penny. I can safely say that all or most of this will be dropped into my next campaign. Thank you and well done."

Print files have been submitted and we are waiting on DTRPG printer. During the release period, the book is on sale for a price much closer to what the kickstarter backers paid. It's only for a limited time though, and once 2020 is upon us, it'll go back up to full price.

You want something exciting to read that will get your players as jazzed about your campaign as you are, so check it out.

Can you believe 1,100 people already bought this thing and love it?

I'll be posting some more about what's inside coming up this week, along with some more exciting posts now that the book is done.