Before this Kickstarter began, I had wildest dreams.

We passed those yesterday. It's sitting at 15k with just over two days left. People seem to like it.

I don't want you to be in a position at the end of this week, once the Kickstarter ends and people are talking and using On Downtime and Demesnes, where you to realize it's a lot more expensive after the Kickstarter. I just recently made this same mistake, passed something up when it was available a low price, and then realized after it returned to its normal price that I wanted it. 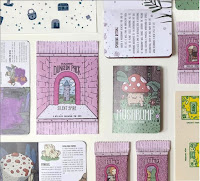 I'm so thankful for everything. It's been one of the most amazing and life-changing weeks of my life. There's still over two days left, and more stretch goals to hit, but this is already a complete and total success.

I didn't do it alone. Other people made it happen with me. I'd like to thank Bodieh, of Slowquest who's just an amazing artist, producing these great physical artifacts-Packets of these booster cards with items, monsters, and adventure. He also illustrated the cover on the latest issue of Megadungeon, and he's amazingly charismatic.

Anytime I can work with Arnold K.to get him to produce more gaming content, the world wins. You can check out his Patreon here. He's creating a Glog, and you'll just have to see how awesome that is yourself. And my personal dream work is getting to finally read Centerra once it's published.

Chris Tamm runs the blog Elfmaids & Octopi and is my primary reference for sandbox play. There's so much content that's just immediately useful in play. He's got a ton of books, free, filled with tables. Check out his Patreon!

Alex needs no introduction, creator of the Adventurer, Conquer, King role playing game, writer, and game designer. The new stuff coming out is making the Auran empire into one of the most original and awesome classic gaming settings, along with one of the best classic rulesets.

And Mike Evans is Hubris, which is setting via design and content personified. Follow him at Wrath of Zombie Blog,

Finally, we've got art previews coming in the next two days. If you'd like to see more of my art, Merciless Merchants is creating a mid-level super-module The City of Vermilion for 1st Edition style play! Once funded, I'll be producing (more) art for the project. Check it out!

More hype and maybe a surprise or two will be coming in the following days. If you haven't backed On Downtime and Demesnes, do it soon before the opportunity slips away. And thanks.
-Campbell