On Dungeons & Dragons, the Fifth again 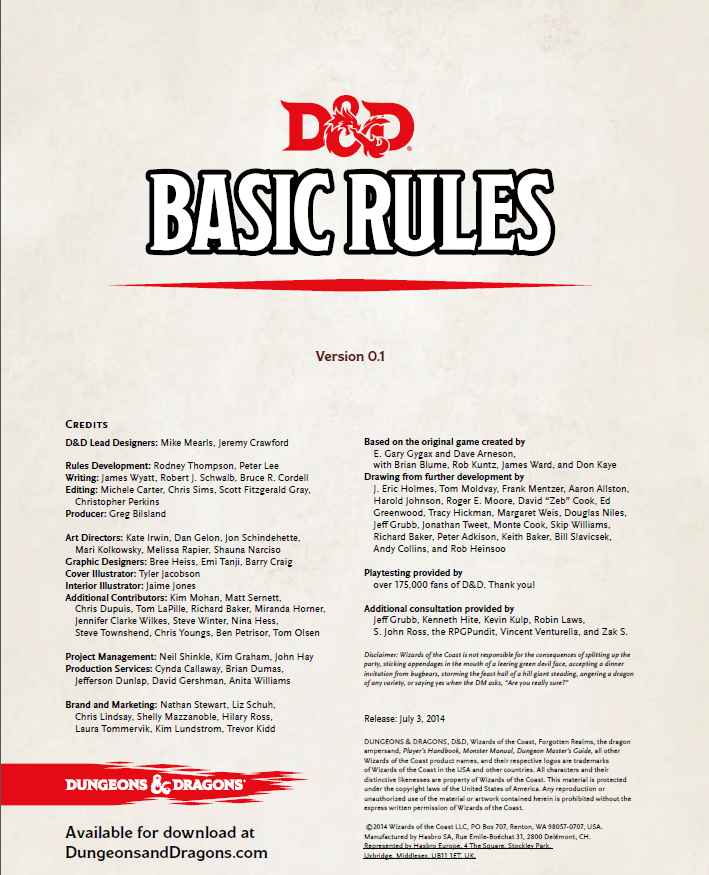 Still more talk on the Dungeons and Dragons Basic Ruleset download. Same rules from yesterday apply. Part I can be found here.

For example: a wizard can either roll a 1d6 for hit points or just take 4 hit points.

Assuming truly random distribution, you are always at a disadvantage to choose random rolling over the rounded up average.

This is. . . interesting. It seems to imply that this is a campaign decision, rather than a personal one. If they had rounded the total down, then the choice would be more interesting. I.e. I can either be safe and take 3 hit points, or test my luck for more. But rounding up, means testing your luck will usually result in you having fewer hit points than you could have.

The other fascinating aspect is that defenses don't really increase very much or get very high. Hit points are really how you tell a high level character from a lower level character. There is a danger in this that combats can drag on, but assuming you continue to use lower level creatures (orc/goblins) as threats, and don't assume everything the players face has to be of a similar power level, then I see it working quite well.

After having a look at the level 4 monsters, who seem to have an average hit points around 30, I'm very unconcerned about the speed of combats. You get rewarded for my subjective appraisal of your behavior. Earlier this week +Jack Mack wrote a superb article on some of the problems with this approach.

". . .what if we keep Mario's jump as the fun and exciting mechanic it is, but ALSO give you a gold coin every time you do it? This is the reasoning behind giving players points when they role-play. Intrinsic fun AND extrinsic fun, that must combine to make the game more fun than ever, right?
Well, research has found that's not quite true. In the words of this literature review: "...expected tangible rewards made contingent upon doing, completing, or excelling at an interesting activity undermine intrinsic motivation for that activity." Giving out an extrinsic reward destroys the intrinsic fun. When you're rewarded for performing an activity you enjoy, you lose interest in performing it for it's own sake. You stop jumping for joy and start jumping only for the reward."

But that isn't even my primary complain. My primary issue is the subjectivity of it all. This is a reward for "playing your character in a way that's true to his or her personality traits, ideal, bond, or flaw" (sic) Is there an objective, measurable, metric here? No.

Well, now I get the reward for some subjective appraisal from someone else. Sounds like hoop jumping to me -- my least favorite activity in gaming. Conversations about "It's what my character would/should do!" are the worst way role-playing degenerates.

This is exacerbated by me in that players can reward each other inspiration for "good roleplaying, clever thinking, or simply doing something exciting in the game" which logistically degenerates down to "Bob's making an important roll, does anyone have any inspiration to give him advantage?"

From Whence You Came

Oh backgrounds, how opposed you are to the idea of development of character in play! Yet how wonderfully do you provide customization along with average to above average hooks that can be used in play!

But What Can You Do?

I am impressed with the skill selection. I use 17 different skills in Numenhalla, each with very specific mechanical effects. The skill list for D&D basic is 18 skills. They look broad and useful! but that's not my favorite part. My favorite part is this.

"Normally, your proficiency in a skill only applies to a specific kind of ability check. . . In some situations, though, your proficiency might reasonably apply to a different kind of check. . . Similarly, when your dwarf fighter uses a display of raw strength to intimidate an enemy, your DM might ask for a Strength (Intimidate) check, even though Intimidation is normally associated with Charisma."

I see thousands of words written on the internet suddenly invalidated by the simple injunction to DM's to use their common sense!

"You can play a male or female character without gaining any special benefits or hindrances. Think about how your character does or does not conform to the broader culture's expectations of sex, gender, and sexual behavior. For example, a male drow cleric defies the traditional gender divisions of drow society, which could be a reason for your character to leave that society and come to the surface. You don't need to be confined to binary notions of sex and gender. The elf god Corellon Larethian is often seen as androgynous or hermaphroditic, for example, and some elves in the multiverse are made in Corellon's image. You could also play a female character who presents herself as a man, a man who feels trapped in a female body, or a bearded female dwarf who hates being mistaken for a male. Likewise your sexual orientation is for you to decide."

First of all, congratulations. Almost half of the people I play with are female, polyamorous, asexual, transgender, or homosexual, so you know, seeing something like this reflects the reality of the gaming I do.

I've seen some people complaining about the specific terms, which is confusing for me. Hermaphroditic refers to a mythological being that is both fully male and fully female (link). Corellon Larethian as the deity of the elves is about as mythological as you can get! Corellon isn't someone they are referring to in the 19th century sense as having both testicular and ovarian tissue. He is literally a mythological figure that is simultaneously both male and female, which is exact meaning of the word as I understand it. It is as correct to refer to him as hermaphroditic as it is to refer to certain snails or plants as such, because of the literal meaning of the word.

Come back tomorrow when we look at some of the monsters that you might face from the basic set.
Hack & Slash

Like posts filled with analysis like this? Support me on Patreon! We're just hit the goal of collecting posts into monthly or quarterly .pdfs for free download! Next up is guaranteeing more posts every week.
Follow, Google +, Newsletter, Support.
Posted by -C at 7/08/2014 07:00:00 AM