On the Chthonic Codex 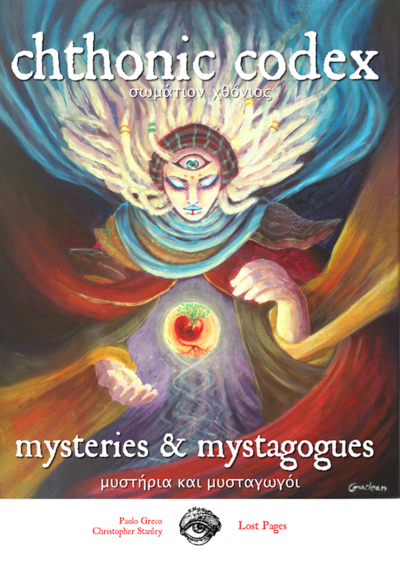 +Palolo Greco is at it again.

This is the Chthonic Codex, Volume III of III, Mysteries and Mystagogues.

Well, there's a desert on fire, filled with ruins. and a series of moist chthonic cavities, protected from the infernal conflagration above.

Mysteries & Mystagogues is the Game Master’s guide for Chthonic Codex. It’s not really structured as a typical GM book. M&M is really an improv tool for running a Chthonic Codex game. - Lost Pages


It's a book full of tables for subsystems for OSR games. It's thick with a flavorful setting, but not one that invalidates whatever setting you're currently using. The setting comes across in the tone -- one of a world where everything is deadly and mysterious and capricious, and everyone else is either your master, knows more than you, or is using you for their own ends.

Cudgel the clever has certainly met more than one result on these tables.

In addition to the picaresque generation of 'what happens next' there's a section for achievements, that once unlocked, grant the players certain bonuses. It's a neat idea for the players to do certain things and be surprised by a small bonus.

There's a series of tables that describe steps needed to research and unlock the power of new spells. You discover a mystery and need certain paraphernalia to confirm your analysis, then you gather a key and travel to a location to discover the mystery of the spell via some act. Rather:

Mordecus the vain upon finding three misplaced library books notes that the second words of each of the titles spell out "fire" "ball" "spell". Taking this as a sign, he gathers four strands of hair from a zombified toddler. After examining these items, he discovers his three omens. He must acquire a necklace of strung together nick-nacks and travel to the broken wall of unescapeable thoughts where he must spend a few days with a chum and a plum, bum and drink rum, and strum and hum to unlock the knowledge of the spell.

Soon, the Mystagogues arrive! On the wall, one of the many marks, a portrait of a strange man begins to speak. He says the initiate must visit the Hidden Well in the Cave of Sorrowful Joy and use the spell Reveal the Unseen to see the well. Once discovered, the portrait instructs Mordecus that he must shed his blood into the well and the knowledge of the spell will be yours. The portrait then grants you the boon of learning the spell you will need, Reveal the Unseen, due to the quality of your plum, rum, and humming.


The example above was randomly generated from the table in about 4 minutes. Maybe had to roll about 10d6. THIS WAS AN EFFECTIVE USE OF MY TIME.

Then there's the tables of Mysteric Powers. Or parodies thereof. Small unique abilities that characters or people may possess. Oh, and a giant table of Laws of Reality.

So, that might be totally awesome to discover in play.
A law of reality: Bones if held, mutate insects during winter
Do a few of those at the start of the campaign and just keep an eye out. It sounds like fun, I'll almost certainly do some of these before the start of my next campaign.

There's a complete system for generating dynamic Hypogean contents (caverns and underground caves in the mythic underworld), encounters, and artifacts.

It is a beautiful .pdf, and I cannot wait until the difficulties get worked out and I can get my print copy.