Did you know there was a final episode written, but not filmed for the Dungeons & Dragons Cartoon? Hold on, because it's a doozy!


It begins with a bargain between the Dungeon Master and Venger, as they stand in a field. If the heroes succeed, they will find the key, and if they fail Venger will take their weapons and their lives.

The group is fighting a Hydra, and the fight is going badly. Presto, Hank, and Uni are cornered, Hank and Diana are barely holding the other heads at bay, when suddenly Dungeon Master appears with a grim countenance. "Save us!" they cry to him.

He replies, "You got into this by yourselves, my young friends -- now get out of it by yourselves!" and vanishes. In desperation they flee, tricking the hydra in a desperate move into a bog.

They regroup, and continue their journey. They find a tattered road sign, and with the way forward unclear, erupt into argument. Hank eventually points out that they are really upset about the betrayal by the Dungeon Master, and they grudgingly move on.

That night, Eric says "This whole Realm is a dungeon, y'know that? And we're all prisoners. We thought Dungeon Master was our friend, but it turns out he's just another guard."

Shelia replies "What're we gonna do now? If Dungeon Master has abandoned us, who's going to help us?"

To which, stepping out of the night Venger replies "I will help you."

He says "Be at ease, my young enemies. I shall not harm you. So Dungeon Master has finally shown his true
colors. Have you never wondered why his advice always led you into battle, and never back to your world? It has been convenient for you to see Dungeon Master as good, and me as evil. But things are not that simple. I have granted you your lives before. Aid me now and I shall grant you your dearest wish -- I will send you back into your own world." 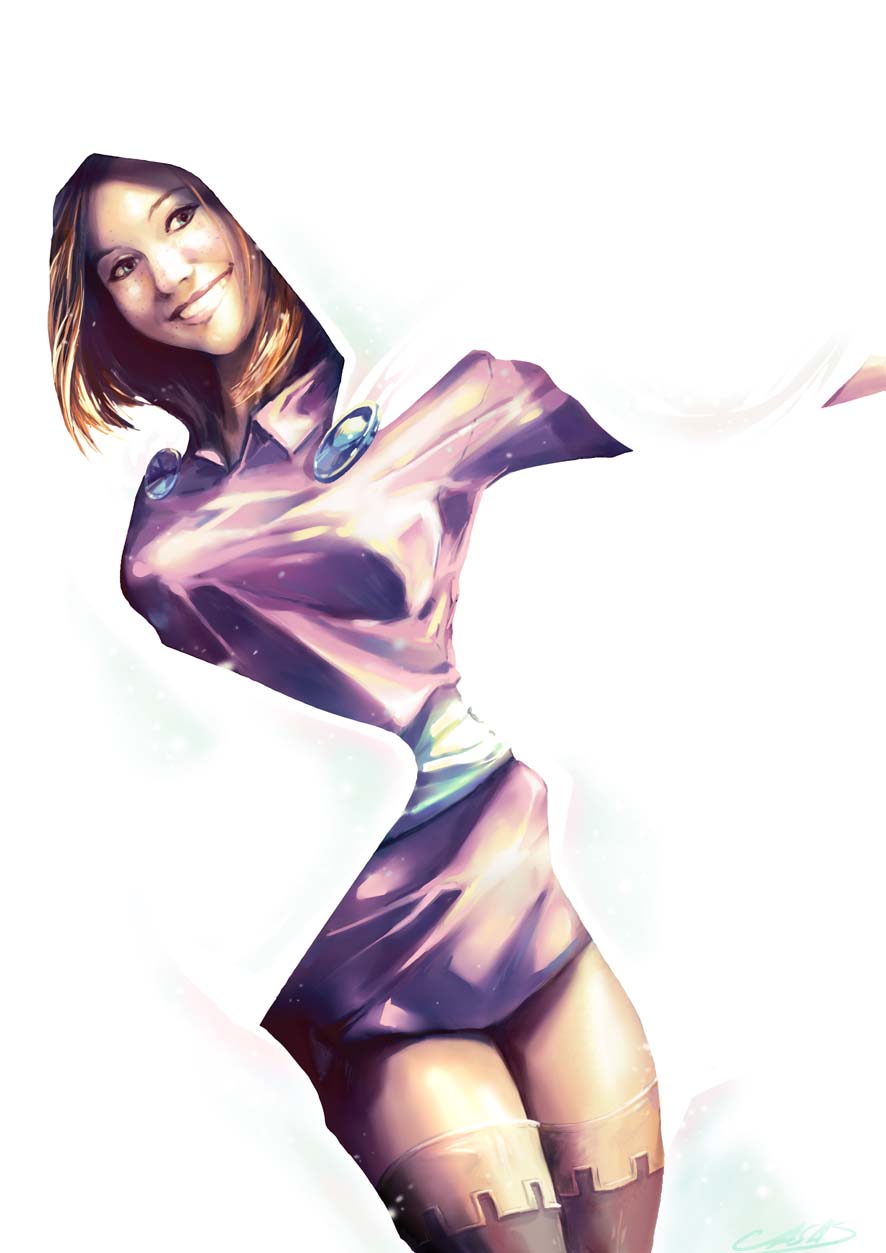 "Far to the south lies Realm's Edge. There you will find a cenotaph -- an empty tomb. Within it is a key, which you must cast into the Abyss. Do this, and you will go home. You have my word."

They argue and Eric, Presto, and Sheila decide to seek the key. Hank, Bobby, and Diana refuse.

Presto makes a shipwrecked galleon fly through the air, and Eric, Presto and Sheila fly to the south. Hank says that they have to reach Realm's Edge first to undermine whatever evil plan Venger has for their friends. Finding a friendly Bronze Dragon nearby, they take flight to the south in pursuit.

Hank tries to bring down their ship to make them stop, but an arrow triggers a volcanic eruption. Heat and ash force the bronze dragon to land, but it appears as if Eric, Presto, and Sheila were unable to escape the blast. Lost without them, and their path to the north blocked by lava, Hank heads to the Realm's Edge with Bobby and Diana.

The cenotaph rises, skyscraper high, on the edge of a cliff, where Dungeon Master and Venger stand watching. 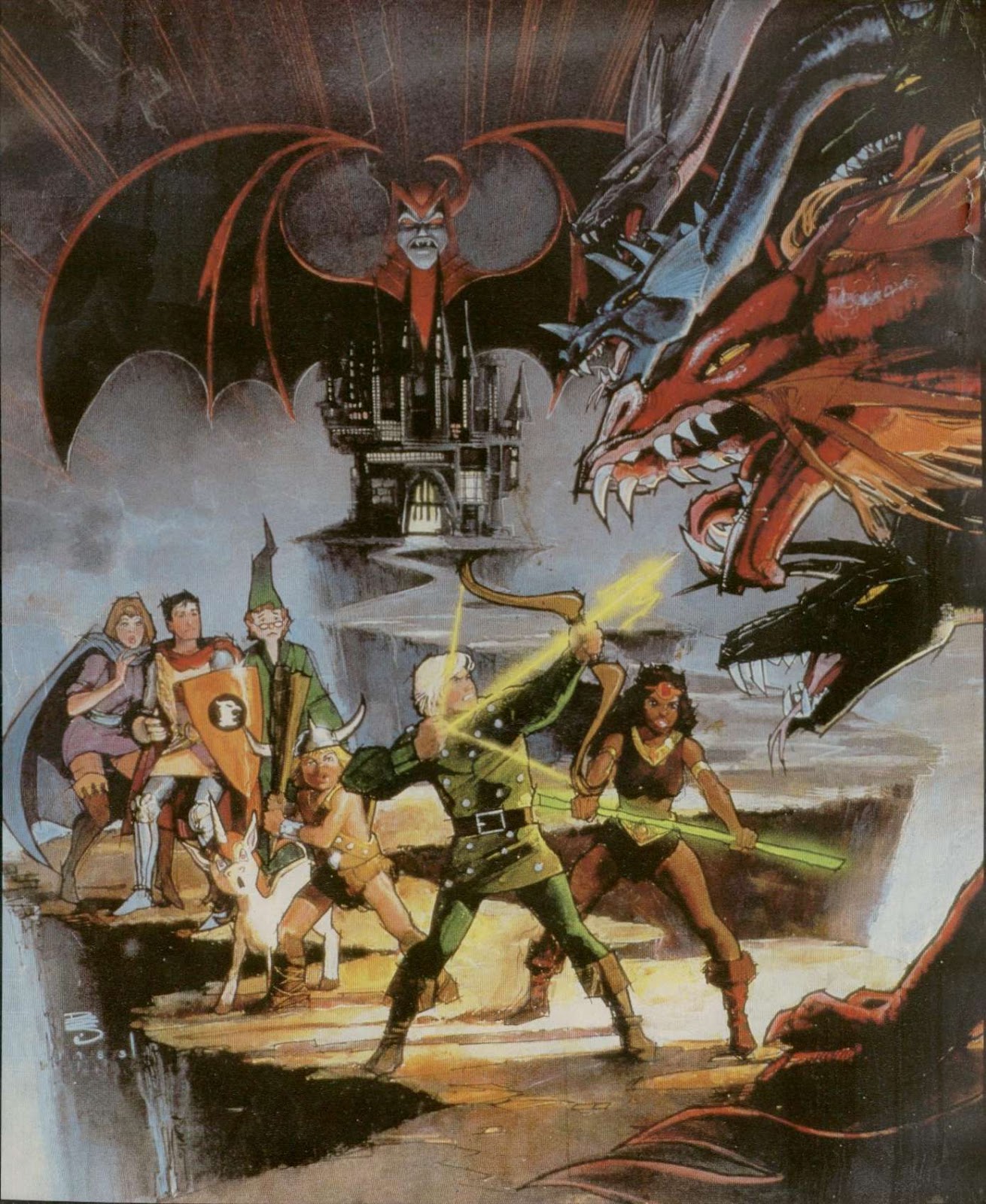 Hank follows to stop them. There is a moment where they stand off, then a giant ooze forces them all up the stairs. Bobby manages to bury it, but that leaves only one way forward.

Up, towards the key.

Then enter the sanctum. A huge cathedral-like chamber, with an ornate sarcophagus in the middle of the floor, the lid carved in the shape of a figure in repose, and a Vault on another wall.. The wall opposite the vault has collapsed, revealing the abyss beyond the realm.

The children enter the room, awed by the view into the abyss, an endless cliff dropping into the mists of night thousands of miles below. Stars twinkle in the depths. Barely visible are the suggestion of titanic, continent sized pillars that support the realm.

Sheila discovers a keyhole on the vault while Presto looks at the figure in repose on top of the sarcophagus, who we now see is  a noble warrior, though lacking fangs, horns, and wings, is unquestionably Venger!

They open the lid and inside is a key. Eric grabs it and moves to throw it into the abyss, but Hank says "Don't you get it? We'll never get home by trusting Venger!" Before the disagreement can be resolved, the ooze returns, knocking Eric down near the floor of the abyss. He moves to throw it off and Hank grabs his wrist, and they fight over the key as the rest of the kids hold the ooze at bay.

Hank says, "Eric! Remember what you said about this whole Realm being a dungeon? I think you were right! We're all prisoners here -- including Venger! and this is the key!"

The ooze attacks and Hank falls into the abyss, dropping the key near Eric.

Venger appears and says "The key Cavalier! Throw it into the abyss -- or you will never see your home again!"

Eric, looking between the vault and the Abyss makes his decision. He runs to the vault! Venger tries to stop him, but is grabbed by the ooze. 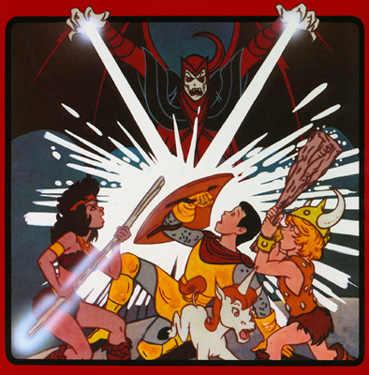 Light bursts from the vault, and bolts fly out, opening gates all over the realm, allowing creatures and men to return to their homes. Till at last the vault is empty.

Eric notes Hank was right, and then remembering his friend, rushes to the edge of the Abyss to find him hanging on a rocky outcropping.

Venger is wrapped in a luminous spell, transforming him into the noble personage carved into the sarcophagus top. He looks at himself in disbelief.

Hank says "I was right! Our mission in the Realm was not to defeat Venger -- it was to redeem him!"

Venger approaches the children, when a burst of prismatic light appears and coalesces into the form of the Dungeon Master. he looks at Venger and smiles. Venger kneels and says "Father, I have returned."

Dungeon Master says "Thank you, my young pupils. you have done the one thing it was not in my power to do -- you have returned my son to me. And you have given those trapped in this Realm their freedom. I can do no less for you. You are free to return to your world now, if you wish. . . or you may stay here, in the Realm. There is still much evil to be dealt with, and many adventures yet to be had."

"The choice, my children, is yours."