On the Ecology of the Kobold

There is a special note at the end.*

"It is the worst and best thing about living beneath the earth. The endless responsibility and pleasure of
slaying the revenge of the stone." - Smoke 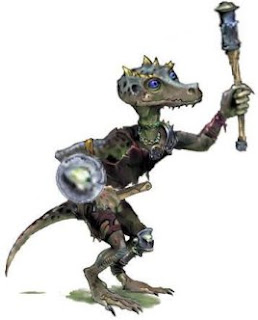 Provided by Patrick Stuart: "The element Cobalt is actually named after Kobald, an earth spirit. The miners who dug out and smelted ores to find useful metals, which included the cobalt ore, which was poisonous with arsenic and ruined other metals, blamed Kobald when things went wrong because the spirit didn't want them down there.

When Georg Brandt found out what was actually poisoning the miners and ruining their ore, a new element, he named it after the spirit in tribute to the men who dug it out."

A Question about Ecology

*Christopher asks: "With these ecology rumors and such, how do you apply these to your games? Are they things that NPCs say to adventurers or are some of these ideas actually applied to change the race up and make things fresh? Or is it a mixture of both? I'm interested because I think some of these ideas are way better than the original ecology for the creatures. "

Take this information and actually change up the monsters. Then take other bits and rumors some correct and incorrect and feed them to the players. Use a group of a dozen or so redesigned and well thought out monsters for your campaign. Profit.

The ecology series is a crowdsourced series of articles, and contributors can be found on google+ under the hashtag #crowdecology. They are limited posts, but following me on G+ will allow you to see them. All artwork is credited where the artist could be found. Classic ecology articles from Dragon magazine are used both for reference and inspiration; the whole impetus of the idea was to create 'classic' ecology articles that are actually useful. Let's Read the Monster Manual by Noisms is also a source of inspiration.
Posted by -C at 5/15/2013 07:00:00 AM