On the Non-Standard Phase

It has phases, as most games, but due to player request are organized in a different order then traditional. The first phase is identical to most games, made of site exploration. The purpose is not to work towards area exploration, but instead directly towards civilization management at level 5. 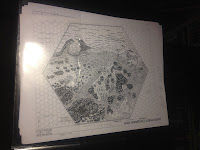 And indeed, the town was secured at level 5. This examination is about the contents of my Deathless Gods folder at the end of the first phase.

This first picture is the campaign map in the left hand pocket of the folder. It is the six mile hex the campaign began in. Behind this map is a sheet with a drawing of each major NPC located in Seamoor. 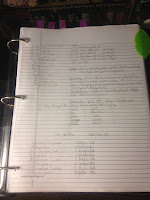 This is the first page in the folder, in the first section. It contains the random reward table. The players get one roll on the table for every action or entry they make on the campaign wiki.

A variety of rewards are available, including magic items and even statistic increases. 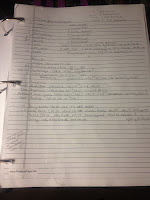 This is the random encounter table for the hex. It uses a bell curve to represent encounters that are a statistically accurate representation of creatures discovered in the local terrain.

It also contains several unique encounters (Hydra, Dragon). They have not occurred, but the players did finally decide to hunt the hydra to make things safer. It did not go well. Only two people died, so it wasn't a total loss.

Encounters are rolled based on areas of high traffic, hour of day, and terrain. 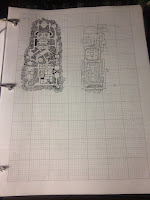 This is an example of an area map. This was for an unidentified submersible craft that the player's cargo ship encountered randomly.

Important areas are keyed, and if there is enough time or if the location is frequently visited the map is inked for higher contrast for use during play.

Following the random encounter table, there are a series of these maps, followed by their descriptions for every site location in the hex. 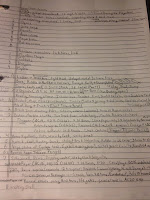 And here is an example of a location key.

This is a first draft of a location key, using the principles of Set Design. 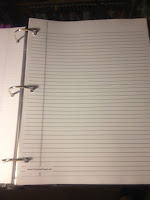 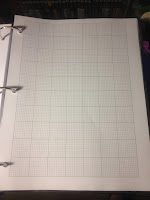 Both blank lined sheets and blank hex paper, taken from .pdf's on incompatech and images from printable paper. 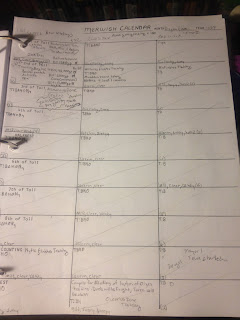 Finally, we have the most interesting thing - the Calendar! There is no link for this calendar, because the blank sheets were found in a pile of gaming materials from the late 1970's and early 1980's in his campaign. I found the cleanest original sheet and made good copies, and we are currently using it as the calendar for our game. I named all the months with the players, and randomly determined the weather months ahead of time.

Finally, at the rear of the first section, I keep the previous DM records. These record information such as the players, the armor classes, criticals taken, monster damage, notes on charges used, magic items, and various other ephemera that must be recorded during the game. This combined with the recordings of each session, provide a solid permanent record useful for campaign plotting and twitter quotes. 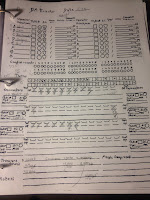 DM:"Broken Jaw, can no longer cast spells." G:"Oh damn dude! How are we going to comprehend all the languages?"
— Courtney Campbell (@nexusphere) August 7, 2012