On a Beastary of the Grim Rocks. 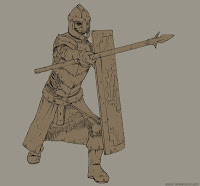 Undead Soliders
Level:1+
Immune to Poison
Drops: Spear (Reach Weapon), Shield (+5 evasion)
Notes: This opponent attacks quickly and does high damage, but is relatively slow when moving. They will often group up, making them even more dangerous. When in groups of 4, be sure to use spells to damage them all at the same time. It is not recommended to engage them directly. (As skeleton with spear and tower shield (damage 1-6, AC +3))

Crowern
Level: 3+
Flies
Drops: Nothing
Notes: The basic Crowern is a fairly easy opponent by the time you meet them. They have the disturbing tactic of being able to attack into the space they move. Also their animation makes them appear further away then they actually are. Defeating them is straightforward, it is their more powerful cousins you have to watch out for. The wyvern has a devastating lightning attack that damages all members of your party.  Attacking with ranged weapons from distance is encouraged, and ducking around corners to avoid fire is a good tactic. Do not engage the wyvern in a long hallway.
(Crowern: AC 5[15], HD 4+3, Attack: 14[+6], Damage 2-8, Movement 3" Fly 18")
(Wyvern: As crowern, but with Lightning breath (4d6 damage, save for half, recharge in 1d4 rounds)

Spiders
Level 2+
Poisons (Damages hit points over time)
Drops: Nothing
These opponents are very dangerous when you first meet them. You can make antidotes to address the poison, or if you have a decent amount of hit points left you may simply rest till the poison is gone. Poison resistance and vitality will make you more resistant. They often come in large numbers, and possibly spawn from destroyable nests. It is recommended to take them on one at a time, and avoid direct combat, due to the speed at which they attack.
(As giant spiders)

Crabs
Level 6+
High damage
Drops: Nothing
These seem like a simple opponent, yet are surprisingly challenging. They have high hit points, high armor and do strong damage. The most deadly thing about them is that they are crabs. They walk sideways. This makes the standard circling around technique to destroy them very difficult -- the direction they appear to move is not the direction they actually will usually move. Sometimes they may also walk forward. Stay on your toes when fighting this opponent.
(Crabs: AC 1[19], HD 10, Attack: 8[+12], Damage 2-16 Movement 9")

Uggardian
Level: 6+
Made of fire, Flies, Ranged fire attack
Drops: Nothing
Notes: This is the first of the common, exceptionally challenging opponent. They are dangerous not only because of their ranged fire attack that hits everyone in the party, but also because they do not have to move in the direction they are facing. Many times when you are fighting them, you will find yourself near pits or long corridors, forcing you to pay extra attention to your movement. (As medium fire elemental) 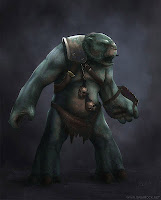 Tunnel Ogre
Level: 6+
Charge attack, Very damaging
Drops: Huge hammer
Notes: These are terrifying opponents. Do not engage them in any distance attacks. Once they note your party they will charge. Also, missile weapons do little or no damage to them (I often find values of 0 or 1 point of damage with my missile weapon user (skill 16+)). The best tactic is to find a 2x2 area and attack them from the side.
(Tunnel Ogre: AC 7[13], HD 12, Attack: 6[+14], Damage 3-30 Movement 6", Double damage on a charge) 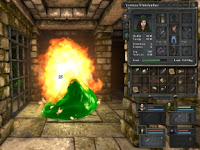 Slimes
Level 4+
Disease attack, directionless form
Drops: Nothing
Notes: These slimes disease you, a temporary effect that causes you to not regain hit points normally. They have a decent amount of hit points and tend to show up in large numbers. Their attack works through grates and gates. Be careful when engaging them and then other monsters while still diseased. (Slimes: AC 8[12], HD 4, Attack: 14[+6], Damage 1-8 Movement 6" 10% chance of disease per hit)


Skinks
Level 4+
Quick attacks
Drops: Nothing
Notes: These little lizards are fairly weak individually, but since they show up in groups of 10 or more they are quite challenging. The real key is to avoid getting surrounded. In my first fight with them, I made healing potions to keep up with the damage. They can pair up into a squad of 2, which has a fairly high damage output and is hard to kill. (Skinks: AC 6[14], HD 4, Attack: 10[+0], Damage 2-8 Movement 9")
Posted by -C at 4/29/2012 07:47:00 AM