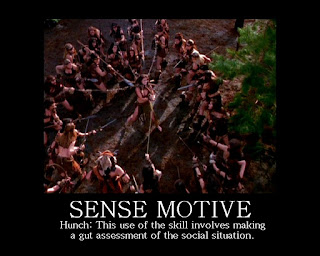 Sense Motive is a skill reflecting your ability to assess situations. It uses the Wisdom stat as a modifier

I am not a big fan of this skill. I wrote a little bit about a certain ogre that existed in many places at once.

The point of these posts was that games are most fun when players can make choices that matter. To do this requires information.

Sense motive is a skill that exclusively exists to give players information about what is going on around them. Since this is a skill, you roll it to succeed at a task. Meaning in a game with sense motive I can be forced to withhold information from players if they fail their skill roll.

But shouldn't there be some things player's shouldn't know? More on this in a second.

What can you do with Sense Motive?

It opposes Bluff. You can get a "gut assessment" of the social situation. You can detect when someone is under an enchantment and you can interpret secret messages.

Which of these have ground for use?

This was the most dreadfully misunderstood point of the whole Quantum Ogre argument. Justin Alexander over at The Alexandrian made the point:

I 100% agree with this assessment.

However, when you are dealing with people, as people they may have needs that cannot be easily met from the in-game information they can acquire. If they are all tired and just want to kill some stuff for a few hours and not do any heavy role-playing - then forcing them to acquire that information in character is a dick move. You can go ahead and tell them, you know - there's a lot of killing to be done here. 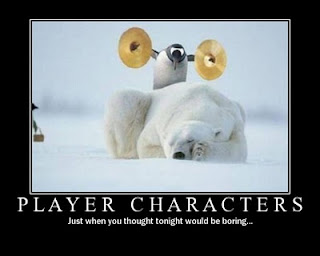 But that's not the problem with sense motive. Sense motive is rolled to determine something the characters would know, and yet they have a chance to fail. As a DM you are handing out a lot of information during a game and people are talking, and grabbing snacks and going to the bathroom, and could just misinterpret a variety of things you are doing that have nothing to do with the encounter or the game.

When a player just wants to understand the context of the situation his character is in, then he should not have a chance to fail.

Conclusions & Suggestions:
Turn the social conflict into some kind of mini-game. Let players use sense motive to get a 'gut feeling' only ignore the die roll and clarify whatever their confusion is. Allow them to use player skill to uncover enchantment effects or decipher secret messages.
Posted by -C at 1/10/2012 09:40:00 AM