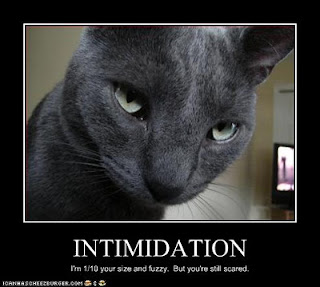 Intimidation is a skill reflecting your ability to frighten or taunt an opponent. It uses the Charisma stat as a modifier.

What can you do with Intimidate?

Not much that is useful. You can force someone to act friendly for one to six turns (seriously the text says 1d6x10 minutes).

You can also give them the Shaken condition as a standard action (an attack).

Which of these have ground for use?

I don't think there's anything wrong with the effects, but there are some caveats. It only uses charisma, and doesn't take into account strength or appearance, leaving that up to the individual to implicitly assign.

So this isn't tied into just your class. Clearly any class can be intimidating - a high level anything can be pretty scary. But with it entirely dependent on charisma, where's this modeled? This skill is doing the opposite of modeling game play from reality, it's allowing you to spend a few points to accomplish a specific effect. There is nothing wrong with this.

So what if we want a wizard that's good at jumping, or a cleric that can mess around with locks. I don't see how modern gaming is really a leap forward with its design. In the most simple incarnation the thief class didn't even exist and players just handled everything with description - but that isn't the edition most of us play.

One of the issues raised with customization without mechanics, i.e. "the say what I'm good at" method was that players could say they were good at everything! Now I've offered this to the players before and never found it to be the case. But even if assuming it is, nearly any game you play is going to have a method for how many of these you can have - secondary skills, non-weapon proficiencies, proficiencies, skills, etc.

My metric is - first and most importantly is the skill method prohibitive to new players? Is the mechanic fun to actually use? By that I mean does the skill increase or decrease the enjoyment of the players at the table. I have no problem with class boundaries being stretched out as players customize their characters, nor do I feel that you necessarily have to limit that.

For all the fans of character builds out there - wouldn't it be nice to have a fully functional 'build' right at first level instead of waiting till you get enough feats and skill points?

What is it we gain by having this skill?

A mechanic for handling intimidation

What do we lose?

There is some annoyance in needing to take a feat to use intimidation with Strength. 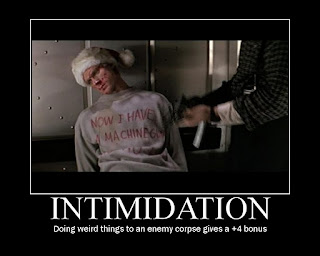 Players enjoy feeling powerful and getting the opportunity to scare NPC's. This skill gives that feeling very poorly. It is nice to have as an option in a redesigned social conflict situation.
Posted by -C at 1/03/2012 08:36:00 AM